[Deu 28:68 KJV] "68 And the LORD shall bring thee into Egypt again with ships, by the way whereof I spake unto thee, Thou shalt see it no more again: and there ye shall be sold unto your enemies for bondmen and bondwomen, and no man shall buy [you]."

Deuteronomy 28:68 was not fulfilled during the transatlantic slave trade, contrary to the "belief" of many Hebrew Yisraelites today.  There is both scripture and historical data to prove that it was actually fulfilled in 322 B.C.E. during the time that the Amalekite Edomite was advising Ptolemy Soter in the rule of the land of Yisrael and the rest of the Grecian empire.  Amos 1:6-11 and Joe 3:1-6 detail how the Amalekite Edomites, Hittites, Phillistines and Grecians were involved in the capture, enslavement and scattering of our Yisraelite fore-parents out of YHWHudah. This enslavement was only part of the conspiracy of the enemies of YHWH and the children of Yisrael prophesied in the Psa 83.

[Joe 3:1-6 KJV] "1 For, behold, in those days, and in that time, when I shall bring again the captivity of Judah and Jerusalem, 2 I will also gather all nations, and will bring them down into the valley of Jehoshaphat, and will plead with them there for my people and [for] my heritage Israel, whom they have scattered among the nations, and parted my land. 3 And they have cast lots for my people; and have given a boy for an harlot, and sold a girl for wine, that they might drink. 4 Yea, and what have ye to do with me, O Tyre, and Zidon(should be Heth), and all the coasts of Palestine? will ye render me a recompense? and if ye recompense me, swiftly [and] speedily will I return your recompence upon your own head; 5 Because ye have taken my silver and my gold, and have carried into your temples my goodly pleasant things: 6 The children also of Judah and the children of Jerusalem have ye sold unto the Grecians, that ye might remove them far from their border."

[Psa 83:1-13, 15-18 KJV] 1 [[A Song [or] Psalm of Asaph.]] Keep not thou silence, O God: hold not thy peace, and be not still, O God. 2 For, lo, thine enemies make a tumult: and they that hate thee have lifted up the head. 3 They have taken crafty counsel against thy people, and consulted against thy hidden ones. 4 They have said, Come, and let us cut them off from [being] a nation; that the name of Israel may be no more in remembrance. 5 For they have consulted together with one consent: they are confederate against thee: 6 The tabernacles of Edom, and the Ishmaelites; of Moab, and the Hagarenes; 7 Gebal, and Ammon, and Amalek; the Philistines with the inhabitants of Tyre; 8 Assur also is joined with them: they have holpen the children of Lot. Selah. 9 Do unto them as [unto] the Midianites; as [to] Sisera, as [to] Jabin, at the brook of Kison: 10 [Which] perished at Endor: they became [as] dung for the earth. 11 Make their nobles like Oreb, and like Zeeb: yea, all their princes as Zebah, and as Zalmunna: 12 Who said, Let us take to ourselves the houses of God in possession. 13 O my God, make them like a wheel; as the stubble before the wind. ... 15 So persecute them with thy tempest, and make them afraid with thy storm. 16 Fill their faces with shame; that they may seek thy name, O LORD. 17 Let them be confounded and troubled for ever; yea, let them be put to shame, and perish: 18 That [men] may know that thou, whose name alone [is] JEHOVAH(YHWH), [art] the most high over all the earth.

The historical evidence to substantiate the above scriptures is provided in the following excerpt from the "Post-Exilic Palestine" section of the 1973 Oxford Bible.

"The Nabatean caravan leaders who specialized in the south Arabian transit in competitions with the maritime enterprises of the Ptolemies, were soon to organize themselves as an independent state, being followed later by the Palmyrenians, who monopolized the communications with central Asia.  Archaeological and documentary evidence points to the importance of Marisa in Idumea, where hellenized Sidonian merchants acted as commercial agents for the Ptolemies." (shown on pg. 1543 below) 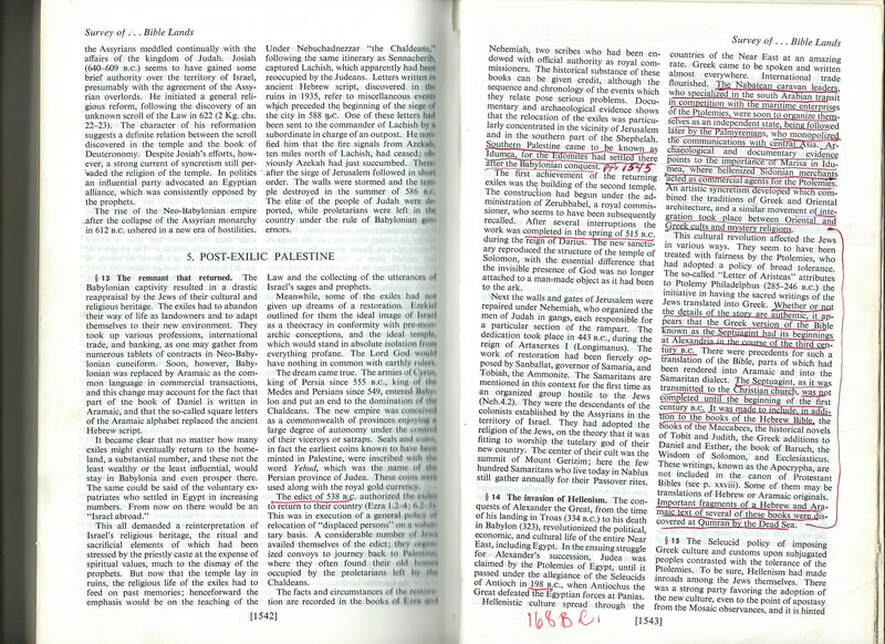 YHWHudah Ben Yisrael discusses the above Oxford bible citation in the fourth part of the "Jesus Myth" series at minute 37 and 45 seconds: